Independent commercial law firm Burness Paull has been named Legal Advisor of the Year at the 2021 Scottish Business Insider Deals & Dealmakers Awards – and winner of a UK-wide diversity award for its work on raising awareness of menopause in the workplace.

The firm, which has topped the table of corporate dealmakers in Scotland a record five years running, collected the prestigious Dealmakers accolade at the annual black-tie ceremony in Glasgow.

The awards are based on deals completed between April 1 2020 and March 31 2021, and the leading Scottish firm had a stellar year despite pandemic disruption.

Mark Ellis, Head of Corporate Finance at Burness Paull, said: “I am tremendously proud of the team, who grew, adapted and excelled in one of the most unpredictable and dynamic markets that we have seen for many years.

“As a truly independent firm, we were able to respond to our clients in a nimble and efficient way, capitalising on opportunities and exceeding client expectation.

“By consistently investing in improving efficiencies through technology, we were able to not only uphold our high levels of transactions, but increase them.

“As a result, this year has been one of our busiest and most successful to date, demonstrated by the quality, quantity and range of deals highlighted in our submission and the regular outstanding feedback we receive from clients.”

Dealmaking highlights for Burness Paull included advising abrdn on its acquisition of AI platform Exo, the Calnex Solutions’ IPO (Scotland’s first IPO in more than two years) and advising TDR and I Squared Capital on the Scots law aspects of their £2.3bn acquisition of Aggreko plc.

The increasing importance of ESG was evident in Forev’s equity investment by Scottish National Investment Bank, backing its EV charging network, and advising compostable packaging company Vegware on its sale to USA based Novolex.

“Many of our deals are cross border and involve international aspects which add layers of complexity and challenges to deal management,” added Mark.

“As lawyers to clients based all over the world, having an office presence in three major cities in Scotland and being Scotland’s only representative of the Lex Mundi network, we are firm believers that geographic distances are not a barrier to delivering for clients.

“We embraced the utilisation of tech and collaboration tools at an early stage and that meant we did not have our hands forced by the global pandemic in implementing alternative communication methods.

“We have also recruited market-leading experts, emphasising the ambition of the team to not only be recognised as a top deal maker in Scotland, but as premium player in the national and international market.”

Burness Paull’s investment in respect and inclusion was also recognised this week as its Menopause at Work programme won the D&I initiative (law firm) category at the UK Diversity Legal Awards held at Plaisterers’ Hall, London.

Burness Paull was the only Scottish-based law firm shortlisted at the event, and took the honours in its category in the face of competition from some of the world’s largest legal businesses.

The award follows hot on the heels of Burness Paull becoming the first accredited “Menopause Friendly” employer in Scotland – as well as the first law firm in the UK to achieve the status.

Peter Lawson, chair at Burness Paull, commented: “We are focussed on what matters to our people and the menopause campaign is a great example of that.

“Through our colleague forum BeValued we knew it was an issue impacting women in the workplace and that people wanted us to do more to tackle it.

“It’s a real achievement to have received this major award along with our recent menopause friendly accreditation.” 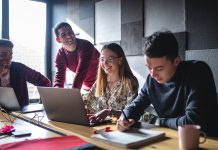 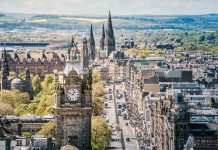